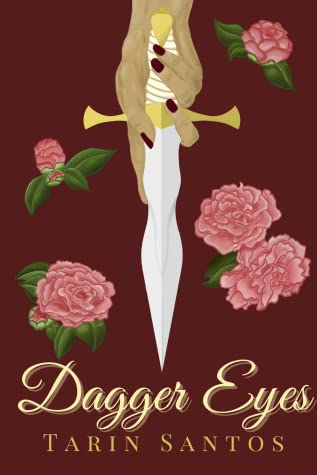 Dagger Eyes is a soft fantasy (light on the magic) court intrigue book that was submitted to me to review. It is also, unfortunately, a book I struggled to finish, primarily due to the plot, but somewhat to the characters as well.
The plot is slow, which is less the issue than it is slow and filled with fluff and injected with the occasional hollow action sequence. The actual core scenes that progress the story are few and far in-between; there is a mysterious organization trying to kill our Protagonist, but the only interaction with them is when they try to kill her every couple hundred pages. We don’t interact them, our MC isn’t narratively compelled to figure out who they are, isn’t locked into an environment where she knows her hunters are present and has to try and navigate through or around them to fulfill the more immediate plot, etc etc. This results in this plot being largely regulated to the background and reduces the story to a travel narrative spiced solely by the adventure of the moment. We get more plot elements as the story progresses, but the author keeps the details from us, telling us only (and repeatedly) ‘something dangerous is afoot that neither you nor the MC knows about.’ But again, that doesn’t give us anything to work with/enjoy. The author uses action scenes to inject excitement into the travels, but they are ultimately hollow because they often don’t involve the major plot, or concrete stakes/objectives besides ‘survive’, and without complications to make them interesting. (They just involve characters fighting in various environments, no additional challenges.)
Aside from the plot, I struggled to like/invest in the characters. Owen (our second pov character) is particularly rough in this regard; he’s largely useless, verges on incompetence (unable to ride a horse despite being a trained solider), is bereft autonomy/ self-agency, and exists almost exclusively to pine after our MC (Alanitora.) He is actively difficult to like because of all these things; he has no scenes of competence where he performs competently, or shows heroic qualities, and spends most of the book following orders and being derided (particularly in the later half.) This results in a character that’s hard to root for.
Alanitora is better from a likability standpoint due to her physical competence and more involved morality and thought processes, but is contradictory in her description vs her execution. In the book, Alanitora is described as calculating, analytical, and cold (paraphrasing slightly here) and is often viewed as emotionless because of this. The problem is she doesn’t behave like this; she constantly makes rash decisions based on emotions, constantly is surprised/lacks control of her situation, makes out with a prince she’s known for days despite being engaged to a different foreign prince, and despite being an ‘intellectual’ character her first ( and largely only) response to conflict is violence (some of this is due to the guards in the narrative having all gone to the ‘stand around and let the protagonists fight the enemies 1v1’ school of combat, enemies and allies both.) Her being combat competent isn’t a problem, but it being the only way she resolves conflict renders the core of her character irrelevant. The plot is also at fault here because one of core elements of Alanitora’s cerebral side is that she possesses the ability to see a person’s nature by looking into their eyes (I.E trustworthy of not.) But she barely uses this ability, and never to any real effect; she is caught out by enemies twice in the course of the narrative, and finds a couple trustworthy people whom she only decides to trust after they prove their worth on several different occasions (rendering her true sight in this regard pointless.) Her entire character (both the analytical side, true sight, and the competent fighter —although her being competent in both without exaggerating her emotional incompetence is part of what makes Owen useless as a secondary protagonist—) is designed for a contained narrative of intrigue (especially for situations where her true sight bestowed knowledge that she couldn’t openly act upon) but is instead situated in a travel/adventure narrative without a clear/pressing deadline.
The secondary characters around Alanitora are better executed, having clear personalities they fulfill, roles in the story, and relationships with one another. (Their relationships with Alanitora are flawed because they don’t fulfill/further the narrative of her being cold and analytical. Her two maids have actively amicable relationships with her.)
The prose is solid, but does occasionally shoe-horn-in fancy word where it doesn’t quite fit, and the use of more modern colloquialisms and turns of phase can be jarring.