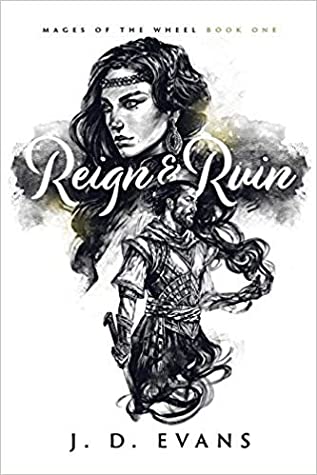 I thoroughly enjoyed Reign and Ruin from start to finish.
The pacing is excellent and while the book does lean more towards the political and character aspects (which I very much enjoyed) there are enough action scenes and scenes of immediate peril to provide variety and deliver satisfactorily on the power aspect of the magic.
Naime is likable, intelligent and forceful as a lead protagonist, with plenty of emotional and personality nuance, and all of this is well integrated into the plot, demanding creative solution to a variety of situations. Her personal motivations are constantly risked and merge excellently with the greater overarching narrative, which also puts her constantly into contact with a major antagonist, allowing the reader to build real animosity for that antagonist. She is emotive yet pleasingly in control and (by necessity) restrained of herself, but also allowed multiple moments to shine with her magic or her intelligence.
Makram provides an excellent pairing for her as a secondary protagonist. He is emotionally and complex and empathetic, and his personality compliments hers. Their romance is well developed, with chemistry, and time is taken to develop it organically so that it feels natural. A significant portion of the book is spent on this, but it is also often built into scenes alongside plot.
The prose is strong and world building (in respects to the magic primarily) is good. The plot itself is also strong, mixing political intrigue with character conflict and a grand narrative of trying to restore peace despite opposition from both sides.